Looking for an unusual dessert that can surprise your guests? Try the PGI Finocchiona ice cream with pecorino, Fig and walnut Pan Brioche with Raspberry crispy wafers. A recipe by Sonia Meliciani.

For the ice cream:

For the pan brioche:

Chop the PGI Finocchiona in a cutter with 200ml of whole milk until it has a creamy texture. Melt the pecorino in a bain-marie with 100ml milk and cream, pour a trickle of glucose, salt and a bit of pepper, let it cool. Mix the two compounds and add pecorino in cubes, make it become creamy in an ice cream machine.

Prepare a starter dough with ‘00’ flour, brewer’s yeast, 50gr of milk and water. Form a dough ball, make a cut on it cover and let it raise until its volume has doubled. Place manitoba flour, soften butter, 3 yokes, sugar and salt in an kneading machine. Add the starter dough and knead by pouring 100gr of milk, little by little and at the end, add broken down walnut kernels and figs. Let it raise for at least one hour. Knead the dough and form a sort of braid, place it in a plumcake mould, brush with a beaten egg, let it raise again, then place in an oven at 190° for 40 minutes.

Put water, raspberry syrup, extra virgin olive oil, flour and a bit of salt and pepper in a hand blender bowl. Blend at maximum speed and emulsify ingredients with care. Heat a small saucepan, pour 1/3 of the emulsion and cook for 5/8 minutes at medium-high heat. Water will slowly evaporate and take a golden color, drain the oil that has come to surface and transfer the wafer on blotting paper. Repeat this operation until the mixture for producing wafers is used up.

A white rectangular plate, a slice of Pan Brioche placed in the middle, with PGI Finocchiona ice cream on top, a slice of fresh fig and a walnut kernel, 3 fresh raspberries placed on one side of the plate and the crispy wafer inserted on the ice cream in a vertical position. 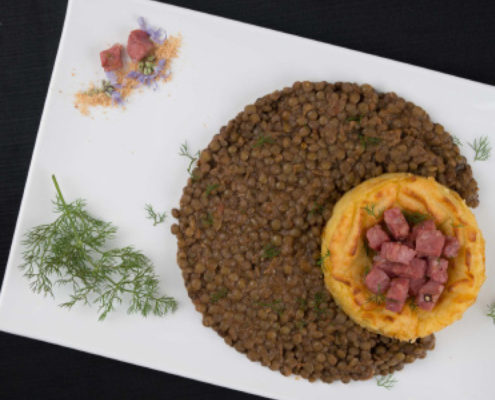 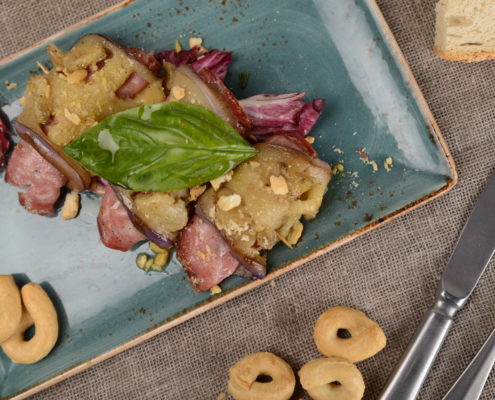 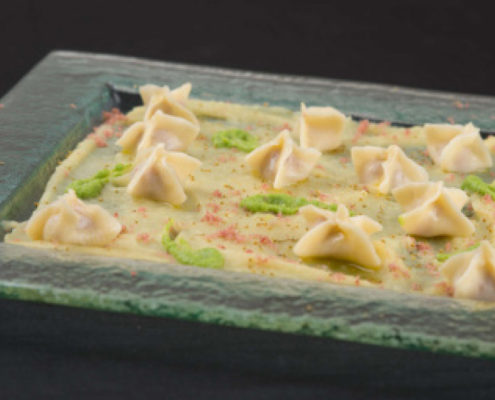